Responses to the FVC4PNJ questionnaire for candidates for the ECC Board of Trustees:

We send the questionnaire to all four candidates.  Two responded.  Two did not respond.

1) Is ECC doing a good job of protecting the health of students, faculty, and staff during the covid-19 pandemic?  What would you do differently to strengthen those efforts?

I have been retired from ECC for approximately 15 months, but it appears that ECC is taking the important steps to protect the health of individuals that come to campus during the pandemic. Routine activities have been modified including most courses being taught virtually, many faculty have modified their styles of teaching to improve student learning and are in contact with students more frequently; all individuals’ temperatures must be taken to access the campus; most employees are working off campus and the campus is cleaned more regularly and effectively. read more

Five candidates responded to our questionnaire. The other candidates did not reply.  Click on Read More and Scroll down to read the responses of all five.

I believe the community, City Hall, non-profits, and our neighboring villages and cities need to work hand in hand to help try to solve this problem. Homelessness is an issue that is impacting all communities.

I support PADS and their great efforts to help the homeless in Elgin and the surrounding areas. The city owns many buildings through-out Elgin and 600 S. State Street is one of them. This property is located on the edge of Elgin away from all the downtown soup kitchens and public transportation. So, is this building the best suitable location? Maybe it is, but again I would like the everyone to work together on this and not force it into a certain neighborhood without community conversion where all the stakeholders can voice their thoughts and ideas. read more

To be considered for this $750 scholarship, you must meet the following criteria.

The essay:  Many of the issues that Fox Valley Citizens for Peace and Justice addresses are on the back of this page. After reviewing them, select one or an aspect of one and explain in your own words why you believe it to be important. Include any volunteer work or social action you have participated in to advance this and/or any other of these issues. read more 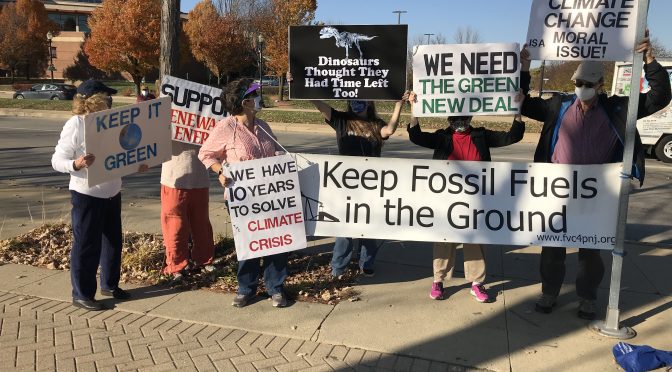 Fox Valley Citizens for Peace and Justice opposes any new fossil fuel infrastructure or fossil fuel expansion.  We especially oppose new  oil pipelines or the expansion of the volume of oil transported through existing oil pipelines.  In particular, we oppose  Enbridge’s Line 3 in Minnesota,   which already brings tar sands oil down from Canada, through Wisconsin and Illinois  to refineries in Patoka, Illinois, and ultimately to the Gulf Coast.

Enbridge wants to replace  it’s existing Line 3 in Minnesota.  If they succeed in getting the permits to do that, they will certainly expand the operation of their Line 66 in Wisconsin. And then they will almost certainly want to expand their existing Line 61 in Illinois, by building a “twin” to Line 61 or by simply increasing the volume of oil they transport through  Line 61.    Every step along the way, these changes would increase the risk of leaks and spills of tar sands oil, the dirtiest, most polluting form of petroleum on the planet.  And every step along the way, they would  make the climate crisis more catastrophic than it already is.  read more 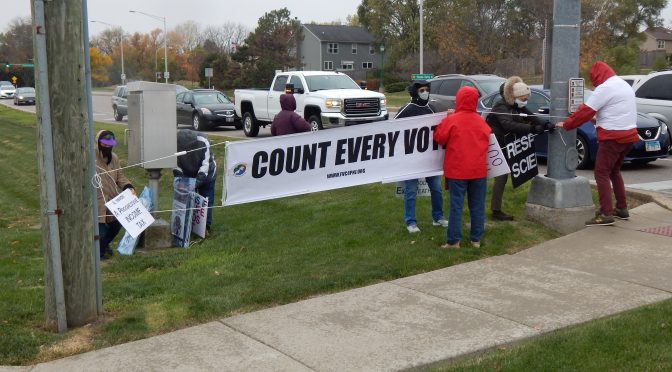 On Wednesday, November 4th,  from 4 PM till 5: 30 PM we will gather at the intersection of Randall Road and Bowes Road in Elgin if Trump or his representatives are attempting to stop the counting of ballots or otherwise acting to negate the election.    We will hold signs or banners with a message:  Count Every Vote.  You can find us and RSVP  on the website of Protect the Results by putting in zip code 60123.

If Trump has conceded by this time, we will turn the event into a celebratory rally.