Question 1) Who Owns the Media?
Six massive corporations dominate the U.S. TV media landscape: Time Warner, Walt Disney, Viacom, Rupert Murdoch’s News Corp., CBS Corporation and NBC Universal.  Together, they dominate news and entertainment.  Then there’s Clear Channel which now owns over 1000 radio stations across the United States.  Companies like Google, Yahoo and Microsoft increasingly dominate the Internet.  These companies have concentrated their control over what we see, hear and read.  Unless we are skeptical, they shape our thinking.  New dangers loom: the proposed merger of Time-Warner and Comcast, and powerful threats to Internet neutrality.

During national election campaigns, these companies can easily dismiss, laugh off, or ignore any candidate who genuinely challenges their power or the power of their advertisers.   By the time you and I enter the voting booth, we are choosing between two candidates who are acceptable to the multinational corporations.

Question 2) Who commands the loyalty of elected officials?
The large multinational corporations have enormous influence over both major political parties through campaign donations.   Once elected, officials know that they must please their big donors much more than the voters.  This has long been true, but since the 2010 Citizens United Supreme Court decision and the recent McCutcheon decision, the trend has escalated.
Watch this video to understand more…

Question 3) Who writes our laws?
Many of our laws at the national and state level are drafted by lobbyists for the multinational corporations. They demand that public interest laws protecting the environment, public health, labor rights, consumer rights, civil rights and our elections be struck down.  Instead they demand and win laws which specifically benefit those corporate entities.   For example, the American Legislative Exchange Council (ALEC) works for big business at the state level. At the federal level, while Congress cut spending for education and firefighters, they have voted huge subsidies, (up to $52 billion depending on how you count it) for the oil companies. And in 2011, 26 major corporations paid no income tax.

Question 4) Who benefits from U. S.  wars?
The oil companies were a major beneficiary of US wars since 1990.  The defense industry benefits from all our wars and war preparedness.  By maintaining 800+ military bases in foreign countries, and projecting military dominance globally, the U.S. protects and expands the markets, access to resources, and economic power of all the multinational corporations.
http://www.usatoday.com/story/money/business/2013/03/10/10-companies-profiting-most-from-war/1970997/
Question 5) Why is your paycheck so small?
Most US manufacturing jobs have been shipped overseas as management searches for the cheapest possible labor.  US wages, adjusted for inflation, are the lowest they have been in 54 years. The recession destroyed 13 million middle class jobs and replaced them with low wage jobs.  Using the Wal-Mart business model, employers keep workers at part time or temporary status with no benefits. Unions have been almost totally crushed, making it harder for workers to fight back. US Trade Treaties support the race to the bottom. 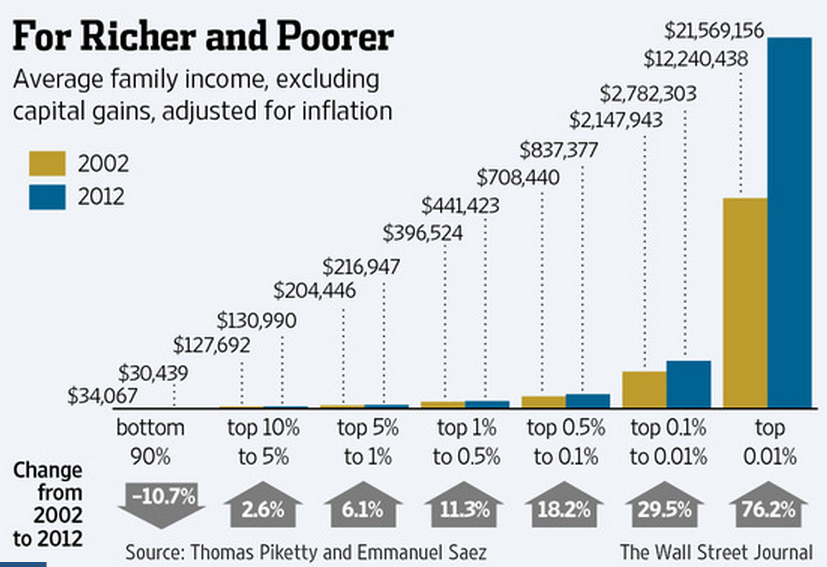